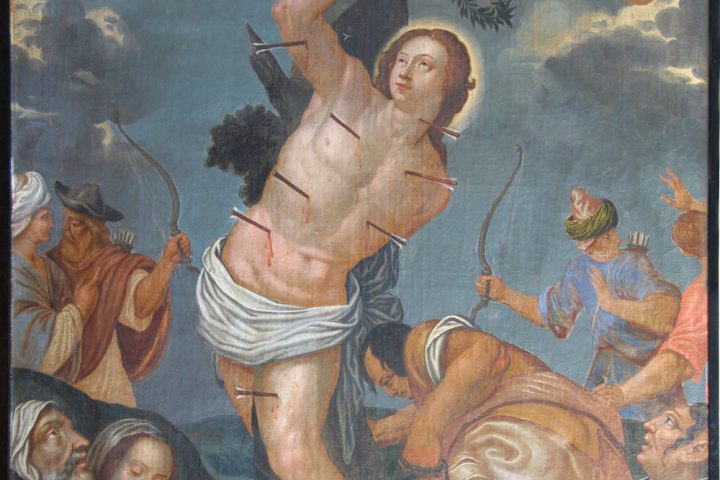 A venerable picture dedicated to St. Sebastian, the patron saint against the plague, from the Chapel in Laduč. It was painted by Hans Georg Geiger, known as the Master HGG in 1679, ordered by the parish priest of Brdovec.

Master Hans Georg Geiger (around 1610 – 1681), an early-baroque Slovenian painter, is among others the author of most of the altar paintings in the church of St. Catherine in Zagreb. The preserved works of Hans Georg Geiger (twenty-six, some of which are marked as works from his workshop) were created in the period from 1639 to 1680. The most important role in the expansion of Geiger’s workshop towards Zagreb and its surroundings had the donors and maecenas, members of the noble families Moscon and Erdödy, that had their land in the area of the Mirenska Valley in Dolenjska and in the Croatian areas around Klanjac, Brdovec and Zagreb.

The cult of Saint Sebastian has arrived very early in our regions with the cult of other early Christian martyrs. On numerous paintings and statues, he is depicted as a young naked man clinging to a pillar or tree, pierced by arrows or spears. During the following centuries, Sebastian’s wounds and martyrdom were inspirational enough for the devotee to address this saint in wounding situations. The associative affiliation with the plague is in the arrows that have been the most difficult of God’s punishment – the plague epidemics that come from heaven in the shape of arrows to infidels and evil people. St. Sebastian was the main patron of the plague until the 15th century, until the appearance of St. Roch, who gradually began to assume the primacy, but did not push out St. Sebastian. (according to: Ante Škrobonja, Sveti od zdravlja, Zagreb, 2004)