Poison is Kept in Small Bottles 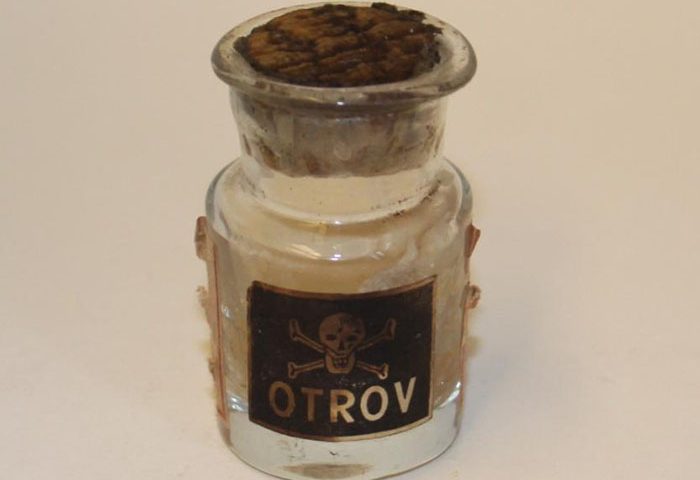 A colorles wide-necked bottle with a cork and labels on the surface, one of which is almost completely ruined except for a small segment on which is written “Isis d” and the other is black with the symbol of death: skull and crossed bones and OTROV inscription.

Strychnine, a poisonous alkaloid that is obtained from seeds of the nux vomica tree (S. nux-vomica) and related plants of the genus Strychnos. It was discovered by the French chemists Joseph-Bienaimé Caventou and Pierre-Joseph Pelletier in 1818 in Saint-Ignatius’-beans (S. ignatii), a woody vine of the Philippines. The nux vomica tree of India is the chief commercial source. Strychnine has a molecular formula of C21H22N2O2. It is practically insoluble in water and is soluble only with difficulty in alcohol and other common organic solvents. It has an exceptionally bitter taste.

Strychnine has been used in rodent poisons and in smaller doses as a stimulant in veterinary practice. It increases the reflex irritability of the spinal cord, which results in a loss of normal inhibition of the body’s motor cells, causing severe contractions of the muscles; arching of the back is a common symptom of poisoning. Strychnine rapidly enters the blood, whether taken orally or by injection, and symptoms of poisoning usually appear within 20 minutes. The symptoms begin with cramps and soon culminate in powerful and agonizing convulsions that subside after a minute but recur at a touch, a noise, or some other minor stimulus. Death is usually due to asphyxiation resulting from continuous spasms of the respiratory muscles.

ARSOTONIN, packaging of a medicine from “Kaštel” factory in which 2 out of 10 ampoules with medicine are preserved,

Arsenic (lat. arsenicum < gr. ἀρσενıϰόν: auripigment), Arsenic is a chemical element with symbol As and atomic number 33. Arsenic occurs in many minerals, usually in combination with sulfur and metals, but also as a pure elemental crystal. Arsenic is a metalloid. It has various allotropes, but only the gray form, which has a metallic appearance, is important to industry.

During the 18th, 19th, and 20th centuries, a number of arsenic compounds were used as medicines, including arsphenamine (by Paul Ehrlich) and arsenic trioxide (by Thomas Fowler). Arsphenamine, as well as neosalvarsan, was indicated for syphilis and trypanosomiasis, but has been superseded by modern antibiotics.

Arsenic trioxide has been used in a variety of ways over the past 500 years, most commonly in the treatment of cancer, but in medications as diverse as Fowler’s solution in psoriasis. The US Food and Drug Administration in the year 2000 approved this compound for the treatment of patients with acute promyelocytic leukemia that is resistant to all-trans retinoic acid.

In subtoxic doses, soluble arsenic compounds act as stimulants, and were once popular in small doses as medicine by people in the mid-18th to 19th centuries.