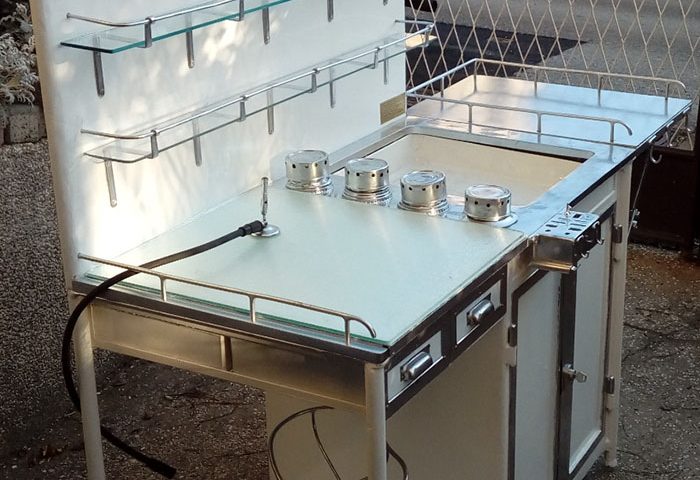 In 2016, the Museum took over a part of the Otorhinolaryngological collection from prof. Dr. Ante Šercer and the accompanying documentation from the School of Medicine in Šalata. Among other things, Museum was enriched with an otorhinolaryngological working table, designed by the founder of the collection prof. Dr. Ante Šercer (Požega, 1896 – Zagreb, 1968), clinician of otorinolaryngology, professor at the Zagreb School of Medicine, head of the ORL clinic in Šalata (1926-1945). He was the head of the Department of Ear, Throat and Nose Disorders at the Zagreb’s Hospital „Sestre Milosrdnice“ from 1946, which he turned to the University Clinic in 1964 and headed until 1966. The table was made in the first Croatian factory for medical instruments Jakob Hlavka, and was included in the product catalog of the company from 1926. Jakob Hlavka (1869-1955), a surgical mechanic, founded the first Croatian surgical and medical instrument factory on 20th of August 1896 in Zagreb; it worked until the end of World War II (later called Instrumentaria).

The factory produced surgical instruments, metal equipment for hospitals, clinics and ambulances, as well as orthopedic prostheses and bandages.

The working table was designed in such a way that it is possible to accommodate everything that an otorinolaryngologist needs in his practice, so that a workplace lays as little space as possible and that all the necessities are closely available to the doctor. It was used in the Clinic for the ear, throat and nose at Šalata, and among others, it was used by the associate and friend of the Museum prof. dr. sc. Ranko Mladina (Split, 1949), specialist in Otorhinolaryngology, full professor at the School of Medicine, University of Zagreb. After taking over the ORL collection from the School of Medicine, which was carefully guarded until then, prof. Mladina has thoroughly restored the Otorinolaryngological working table for exhibition at the Museum, unselfishly donating his professional knowledge, resources and time.

Otorhinolaryngological working table in the Clinic for the Ear, throat and nose in Zagreb, photo from the album of prof. Dr. Ante Šercer, Foto Donegani, 1941.