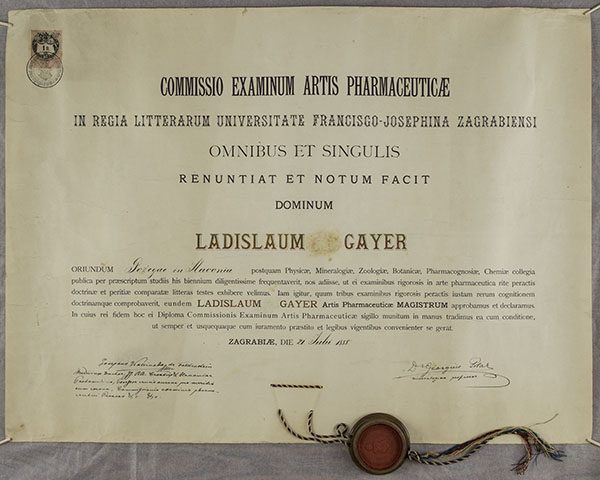 Ladislav Gayer (Požega, 1867. – Zagreb, 1939.), Croatian pharmacist.
He was born in Požega on February 26, 1867, two years after his older brother Eugen, from Aleksandar and Emilija Gayer. In 1887, Aleksandar Gayer moved to Zagreb with his family, where he was enrolled in the Zavičajnik of the City of Zagreb as a “Royal alderman of the Courttable”. After graduating from high school Ladislav Gayer followed the contemporary educational tradition so he became a practitioner in Vinkovci in the Pharmacy K crnom orlu of Josip Kallivoda. Kallivoda bought it three years earlier from Julije Domac (1853 – 1928). After three years of practice in a pharmacy young practitioner Ladislav Gayer passed his internship exam at the Grammy of Pharmaceutical Society in Osijek in 1885. His education was continued in Zagreb, where his entire family moved. He enrolled a two-year Pharmacy course within the University of Zagreb, where he was promoted to the Master of Pharmacy on July 21, 1888.

During the next 15 years Ladislav Gayer worked as an associate in several pharmacies: from October 1889 to January 1890 at the pharmacy Kod svetog duha in Novi Sad, then at Mayer’s pharmacy in Ljubljana, a pharmacy Maria Hilfe in Celje, a pharmacy K zlatnom lavu in Karlovac, from January 1st to December 1st, 1897, in the pharmacy of Sv. Marija in Zagreb, and from 1st December 1897 to March 1898 at the Hinko Brodjovin’s Pharmacy K Zrinskom in Zagreb. Ladislav Gayer got the concession for the Zagreb Red Cross Pharmacy by the Decree of the Croatian-Slavonian-Dalmatian Land Government from 6 June 1903. Her name and emblem is mentioned by pharmacist Stanislav Ilakovac in his article: The names and signs of the pharmacists pointing out: The sign of the Red Cross of the Gayer pharmacy and the Geneva Cross, as can be seen on one pharmacy in Budapest, is protected by the Red Cross Society in Geneva, so the pharmacies should not take it as their own sign. Despite aforementioned the sign of the pharmacy still stands on this building.

Ladislav Gayer died in 1939, and his death was recorded on the pages of Pharmaceutical / Apothecary newsletter in these words: Mr. ph. Ladislav Gayer, owner of a pharmacy in Zagreb died on November 1, 1939, at the age of73. The late Gayer was well-known for his nobleness and honesty. Because of these beautiful features, he enjoyed the reputation and respect beyond the circle of his acquaintances.