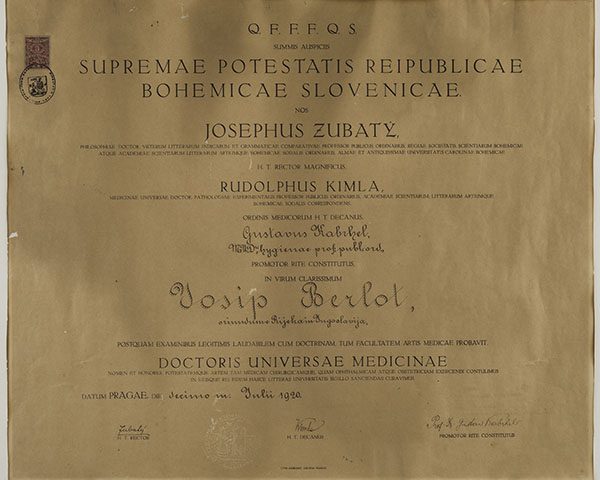 Josip Berlot, bacteriologist, immunologist and hygienist (Rijeka, 28th April 1895 – Zagreb, 14th September 1975). He attended gymnasium in Gorica and studied medicine in Vienna, Paris and Prague, where he was promoted in 1920. In 1923, as head of the Department for production of biological preparations of the Epidemiological Institute (later named Hygiene Institute) in Zagreb, he began the preparatory work for the production of domestic serum against diphtheria and other antitoxic serums and antibacterial preparations. In 1924, he resided in the US at the Hygiene Institute in Albany, where he studied the role of the reticuloendothelial system in immunity (Journal of Experimental Medicine, New York, 1926; Liječnički vjesnik, 1926, 1927).

Returning to his homeland, he intensively dealt with immunization issues (Praktični liječnik, 1927; Liječnički vjesnik, 1929) and after numerous experiments in 1929, the first diphtheria antitoxic serum was released in Yugoslavia. In 1930 Berlot completes specialization in bacteriology, immunology and hygiene in Boston. For some time he has been working as a private doctor and a doctor of a city ambulance in Zagreb’s slaughterhouse and then as a city hygienist at City Physics in Zagreb. As head of the Hygienic-epidemiological service of the City of Zagreb he conducted the sanation of the neglected Zagreb suburbs (Gradska općina, 1938, Gradski namještenik, 1939), working on hygienic water supply and sewerage of the city. He was the first one in Zagreb to introduce a two-time spraying of mosquitoes and systematic deratization. He organized health education and founded a special Museum of hygiene. He was the initiator of hygienic-household courses, “mother and child” courses and many other health-educational activities. On the eve of the Second World War he was a prominent advocate in the organization of the Civil protection service and was one of the founders of the School for civil protection.

After his release, he was senior health adviser at the Health Department of GNO Zagreb and the sanitary inspector of GNO Zagreb, and he fought for better organization of this service (Higijena i tehnika, 1948). He was particularly concerned with the communal hygiene and wrote about the problem of hygiene in a densly populated areas (Problemi higijene, Belgrade, 1951) and the burial of the dead (Komunalna higijena, Belgrade and Zagreb, 1953); He was a part-time teacher of communal hygiene at the Faculty of Medicine in Zagreb.

He was a member of the Scientific and Medical Council of the National Republic of Croatia, a member of the Professional Council of the Ministry of Public Health and a consultant of the Institute of Immunology in Zagreb – an institute whose first foundations were in the pre-war Berlot Department for the production of biological preparations. He also studied the history of his profession and compiled an overview of the development of microbiology and immunology in Croatia (I. Symposium on the history of microbiology and immunology in Croatia until 1923, Zagreb, 1973). He is the winner of the Golden medal of the Society of Yugoslavian urbanists.