The Desaty family of pharmacists in Valpovo 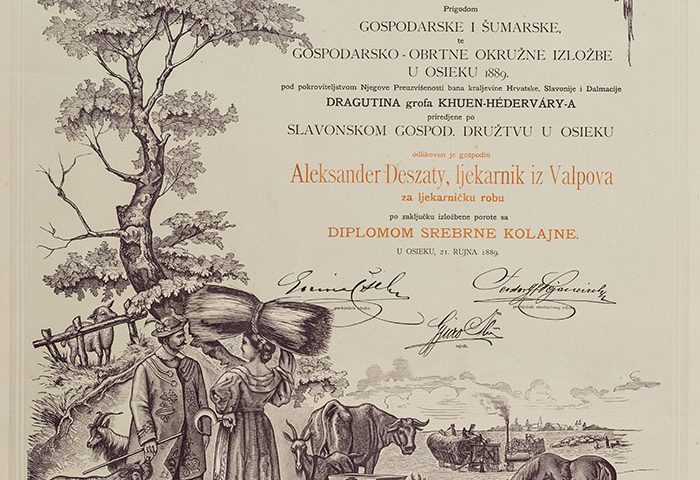 Diploma of pharmacist Aleksandar Deszaty, an award in the occasion of Economic and crafts district exhibition in Osijek, 21. 9. 1889., HMMF-280

Aleksandar Deszathy (Desaty) (1834 – 1911) from the famous Osijek pharmacy family, he opened the first pharmacy in Valpovo in 1860. The pharmacy was located in the center of Valpovo, on the central square, in the late-baroque storey house of the Desaty family built in 1863. It consisted of a number of rooms: oficina (serving of patients), production room (production of medicines), office (administration and bookkeeping), laboratory (water distillation and chemical testing), small warehouse, large basement and attic (drying of medicinal herbs). He was succeeded by his son Aurel.

Ferdo Desaty (1899 – 1965), son of Aurel and grandson of Aleksandar, he is the third generation of the pharmacy family from Valpovo. Shortly after the retirement of Ferdo Desaty, the pharmacy was moved to today’s location on Osječka Street, only a few meters from its original location, and has been operating until today as its successor. Unfortunately, there is almost nothing left from the pharmacy K Spasitelju as is the case with the late-baroque Desaty storey house also.