From apothecaries to pharmacists – development of pharmaceutical education 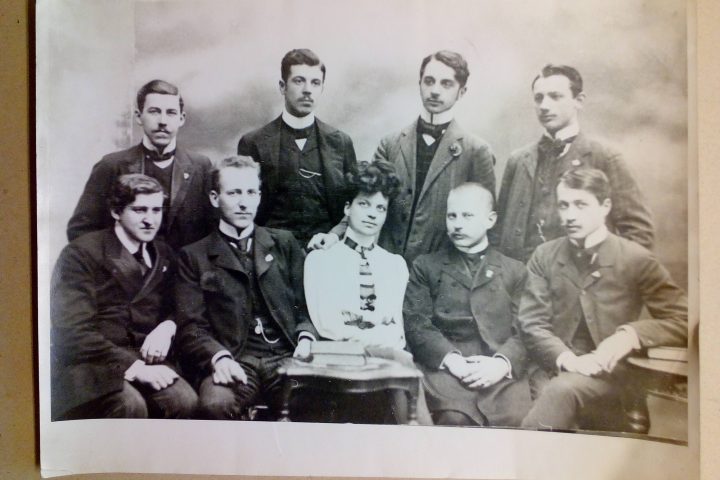 Students of pharmacy in Zagreb 1908, Anka Uhlir in the middle

From apothecaries to pharmacists – development of pharmaceutical education

At the end of the 19th century, especially after the establishment of the pharmaceutical course, the new Law on Pharmacy from 1894 paved the path of development from the apothecary profession to pharmacy (scientia pharmaceutica), and education was becoming more institutionalised and improved. The development of academic instruction at the pharmaceutical course at the University of Zagreb was characterised by several reforms. The first change was introduced already in 1888 and it referred to the entry requirements. The enrolment now required six years of grammar school or a realschule which taught Latin and included three years of training in a pharmacy. Those who passed the Matura exam were only required to have two years of training. The following curricular reform of pharmaceutical studies in 1896 abolished mineralogy and zoology, while the volume of chemistry and botany lessons increased. Furthermore, pharmacognosy and pharmaceutical chemistry practice lessons were introduced. The two-year pharmacy training after the internship exam was terminated, which used to be a requirement for entering the studies. An important shift in the reform was issuing the Order of the Royal Croatian-Slavonian-Dalmatian Land Government from 9 September 1901, which defined the requirements referring to females as full-time or part-time students enrolling in the Faculty of Philosophy of the Royal University of Franz Joseph and in Zagreb. The first female student who graduated from the Croatian Faculty of Pharmacy was Anka Uhlir. The Matura exam (a maturity diploma), as a university requirement, was introduced in 1914.

The higher education course in pharmacy first developed as the Pharmaceutical Course (1882 – 1928), and then as the Pharmaceutical Department of the Faculty of Philosophy (1928 – 1942), but what it aspired to reach was an independent pharmaceutical faculty with a tendency towards a four-year study course, which was realised only in 1942. In the time of the Pharmaceutical Department, many changes were introduced, such as that the course would take four years and that the students have to spend their first year in one of the public pharmacies, after which they would take an initial exam before a committee. The curriculum was in that period also considerably broadened, so after the second year the students had to take their first diploma exam, and after the eighth semester the second diploma exam. After this the graduate student obtained the title of a Bachelor of Pharmacy, and after another two years of training in a public pharmacy and a successfully passed state exam he became the Master of Pharmacy. Pharmaceutical studies thus became more accessible to the large number of interested students and the number of young people obtaining a graduate degree in pharmacy increased year by year.