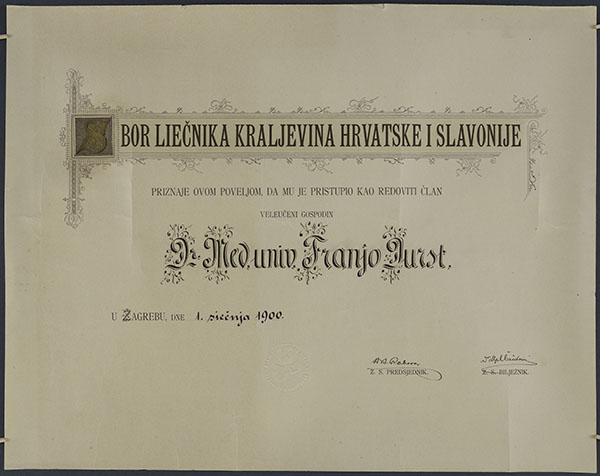 The Charter of the regular member of the Association of physicians of the Kingdom of Croatia and Slavonia dr. Franjo Durst
Zagreb, 1st January 1900., HMMF-292

Franjo Durst, Croatian gynecologist and obstetrician (Zagreb, September 6th, 1875 – Zagreb, October 16th, 1958). After graduating from the University of Graz (1899), from 1905, he was Professor of the College for midwives in Zagreb and the head of the National Maternity hospital, which in 1921 he turned to the Department for Female diseases and birth where he was the head until 1952. He was a full professor at the Faculty of Medicine in Zagreb and regular member of JAZU.

He was the first one in Croatia to unite gynecology and obstetrics; specially contributed to the operative treatment of uterine cancer and to the improvement of Caesarean section technique.