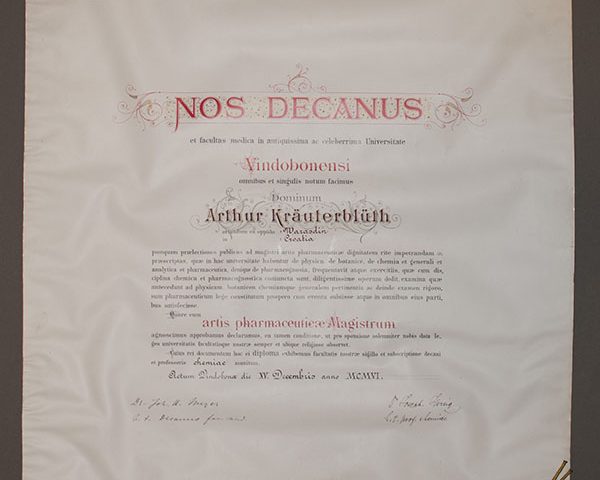 Artur Krajanski (Kräuterblüth),  pharmacist, pharmacologist and historian of pharmacy (Varaždin, 25th May 1884 – Varazdin, 6th April 1941). Son of Benjamin Kräuterblüth, a polish born pharmacist from Varaždin. Since 1883, he was the owner of the oldest Varaždin pharmacy K zlatnom anđelu. He graduated in Varaždin in 1902, had a two year practice in his father’s pharmacy, and in 1904 he passed hs tirocinium exam. He finished pharmacy in 1906 at the University of Vienna. After that he took courses in chemistry, hygiene and pharmacology at the University of Budapest, where he made a dissertation on the dissolution of alkaloids in the blood (Alcaloidák oloszlása a vérben, Budapest, 1908) and a doctorate in 1908. At the same year he also graduated in bacteriology in Vienna, and in 1909 he specialised medical analysis in Budapest. Returning to Varaždin, besides leading his father’s pharmacy he did scientific work about bacteriology and pharmacognosis in a laboratory that he had set up next to his pharmacy in 1910. In 1911 he was appointed a permanent court expert for chemistry at the Varaždin Judicial Table. In 1912, he held lectures on the goals of modern pharmacy and the education of pharmacists.

During the First World War, he was the head of the chemical laboratory of a reserve hospital in Varaždin. In 1920, he took over his father’s pharmacy and held thirty lectures in pharmacy, chemistry, hygiene and medicine at the Local University in Varaždin. At that time he began to research the history of the profession, and from 1923 to 24. he studied old pharmaceutical literature at the Institute of Medical History of the University of Vienna and held several lectures in the history of pharmacy at the then Local University of Zagreb, which brought him popularity in the class circles and in the general public, and the Croatian-Slavonian Association of Pharmacist put hi min charge of collecting pharmacy antiques.

He propagated the founding of the Institute of History of Pharmacy and introduced the course in History of pharmacy at the Pharmaceutical Studies and participated in the work of international societies for the history of pharmacy. In 1923, with the historian K. Filić, he worked on founding the Museum Society, and then the Varaždin City Museum, where in 1925 he arranged an old pharmacy and alchemical laboratory with a wealth of precious items from his own historical collection. That same year he was appointed a member of the commission for the creation of a unique pharmacopoeia SHS (State of Slovenes, Croats and Serbs). In addition to the lectures, which were mostly printed, he also published other papers in the journals Liječnički vjesnik (1908), Pharmazeutische Post (later Pharmazeutische Monatshefte, Vienna 1909, 1933), Farmaceutski v(i)jesnik (1912, 1923-26, 1928), Aesculap (1921), Vjesnik ljekarnika (1923, 1925) and Almanah III kongresa slovenskih apotekara (Zagreb, 1935) and Spomenica varaždinskog muzeja 1925.–1935. (Varaždin, 1935). His expert discussions were published in the Farmaceutski vjesnik, at the same time as separate publications Deontologijska načela starih ljekopisa (Zagreb, 1925), Karakteristika sredovječne materiae medicae (Zagreb, 1926) and Kako su nastala današnja synonyma lijekova (Zagreb, 1928.). The extensive work on the life and work of medical reformer Paracelsus remained in the manuscript.

He was a commissioner for Yugoslavia of the International Society for History of Pharmacy, founded in 1926 in Tyrol, a member of the action committee for the founding of Association of Pharmaceutical Scientists in 1939 and one of the founders of the Apothecary Co-operative. In 1933, he became the first member of the International Pharmacy Community, the first in the then state. He was also a musician, a pupil of J. Rosenberg and his son, V. Rosenberger Ružić. He played the cello in the city orchestra and was a founder of the Orchestral society in Varaždin. He played music at his home with his wife and brother Ernest. Performed his duties in the Varaždin Jewish Municipality and encouraged the establishment of a local Zionist organization. On the day the German army entered in Varaždin he committed suicide.