The Collection of Pharmacy Jars 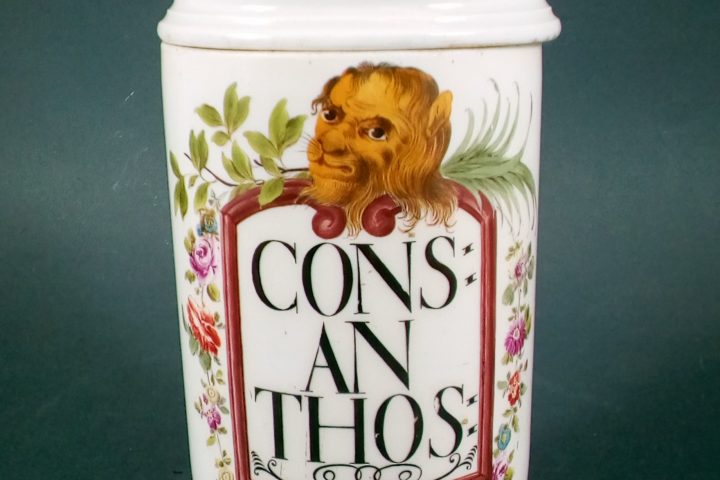 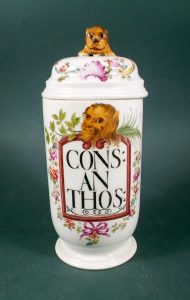 The collection of pharmacy jars of the Croatian Museum of Medicine and Pharmacy originates from the collection of the Institute for the History of Pharmacy, which was founded in 1952 by Prof. DSc. Hrvoje Tartalja, professor of the history of pharmacy at the Faculty of Pharmacy and Biochemistry, University of Zagreb. The Institute was later integrated into the Institute of the History of Science of the Croatian Academy of Sciences and Arts (now the Division of the History of Medical Sciences of the Institute of History and Philosophy of Science of the Croatian Academy of Sciences and Arts). The initial core of the pharmacy jars collection was formed by purchasing the Brodjovin collection (from the Sallopek pharmacy) from the Croatian Pharmaceutical Society in 1951. The collection has a total of 698 containers that were collected by purchase or (mostly) as a gift from various pharmacies and pharmacists throughout Croatia: from Bjelovar, Donja Stubica, Glina, Hrvatska Dubica, Hrvatska Kostajnica, Ilok, Jastrebarsko, Karlovac, Križevci, Lipik, Osijek, Otočac, Pula, Rovinj, Samobor, Sisak, Skradin, Split, Suhopolje, Šibenik, Trogir, Valpovo, Varaždin, Velika Gorica, Virovitica, Vis, Vukovar and Zagreb, and were made in the period from the 16th to the beginning of the 20th century.
In professional pharmacy terminology, pharmacy jar is most often called a “drug container”. Drugs, i.e. fresh or dried plant organ, as well as secondary products of plant organs or isolated plant substances were stored in these containers. The characteristics of medical preparations mainly determined the inscriptions on the jars, i.e. the content that was in them. In Croatia, jars from the 18th and 19th centuries are mostly preserved, although there are several from the 17th and even 16th centuries. So far, no evidence has been found that we had workshops for the production of pharmacy containers, which indicates that these are imports from Italy, France, Germany, Austria and Hungary. For the storage of liquid substances, mostly glass jars or bottles were used, while dry substances and fats were stored in the wooden and ceramic ones. As products of artistic crafts, jars often carry the design features of the stylistic period in which they were created. They are mostly hand-painted, sometimes bearing the marks of the manufactory in which they were made, and the owners of the pharmacies put their marks on the bottom as well.
The collection includes drug containers made of different materials: wood, majolica, faience, stone, porcelain, glass, metal and serpentine.
The sub-collection of wooden containers numbers 231 copies. The objects date from the 16th to the 20th century. They are mostly cylindrical in shape, with a few exceptions standing on a foot (urn shape). In older containers, alchemical symbols can be seen next to the content label. The containers are painted, most often with an ornamental frame for an inscription or a floral ornament inside which there is an inscription, while the newer ones bear only the inscription in black letters of the Roman type. Some examples show that they have been repurposed, the old layer has been scraped off and a new copy comes over it.
The next sub-collection consists of glass jars and bottles, including those made of milk glass, a total of 226 items of various shapes. It is mostly square, and there are also cylindrical and vase-shaped ones. They also vary in size, from very small (probably for some expensive and rare ingredients) to larger ones. They are painted, most often with a cartridge containing the inscription, some show alchemical symbols, and numerous copies depict a bird above the inscription.
The sub-collection of ceramic jars includes vessels of various shapes and sizes made of faience, majolica, stone and porcelain, and there are 232 in total. They were made in the period from the 16th to the 20th century and it is worth mentioning the specimens produced in Savona (the oldest specimen is from 1531), those from the Halbarth factory in Graz and specimens from the porcelain manufactory in Vienna (Alt Wien) which is characterized by Rococo decoration: a stylized lion’s head. The cylindrical shape predominates, in older periods they were painted with floral ornaments, while later only the bordered inscription remains.
Finally, there are 2 small metal containers with decorative markings and 7 small cylindrical containers made of serpentine.
The collection of pharmacy jars of the Croatian Museum of Medicine and Pharmacy testifies not only to the heritage of the Croatian pharmaceutical profession, but also to the heritage of applied art and the cultural history of our region.

Pharmacy jar with the inscription Egiptiac, Savona (?), 1531, faience, height 20 cm, inv. no. HMMF-2943 (oldest in the Collection; from the collection of the Croatian Pharmaceutical Society) 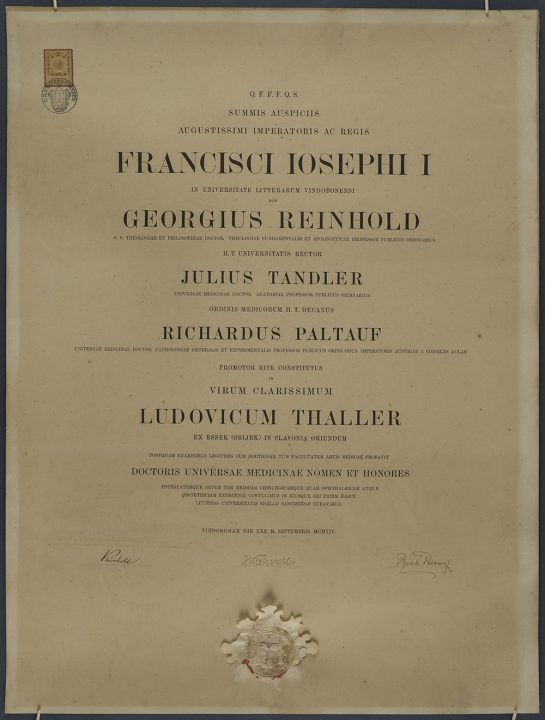 The Collection of Diplomas and Charters